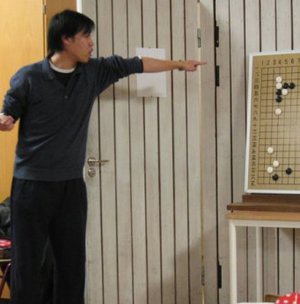 Su Yang, known as Jeff, is a  Finnish go player ranked  EGF 6 dan who plays as Finnish8d on KGS.

Jeff started to play go in 1988 in China at a go school while 8 years old. When he was 12, he reached the ranking of Chinese 5 dan. He started to teach go in China in 2000, and in the summer of 2005 started his career of teaching go in English.

He starts teaching online on KGS in early 2006. By now, hundreds of students have been under his tutelage and he only had received good feedback from them.

Nowadays, Jeff is living in Finland where he teach go in various tournaments and other events.

If you you’d like to know more about Jeff, check out his interview on GoSensations !

If you are interested in his teaching, feel free to contact him by email or directly on kgs