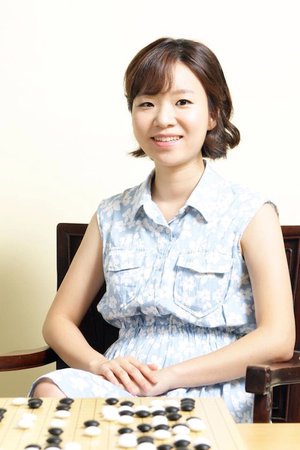 She often teaches both in real life go events and online. She streams at twitch and uploads videos in her youtube channel.

We interviewed her to find out a bit more about her!

When/where did you learn go?

When I was 5 years old, one of my friends told me he will go to a Go(Baduk) academy as of next week. There were more than 10.000 Go academies in Korea. He was a close friend and we hung out everyday, so I asked my parents if I could also join the Go academy with my friend. Finally I joined Go academy and I really enjoyed it, especially capturing stones. I have been totally into Go ever since that time. I never stopped playing Go and still love it. As one might expect, the friend who made me to start Go quit a few months later.

Go is clearly a competitive game. When I was a teenager, the part I liked the most about this game was winning. Also I had to win many games in order to become a pro. But after becoming a pro, I started thinking differently. Go makes me consider what my opponent is thinking. When I play Go, I should try to guess why she/he played there. It made me understand other people’s thinking and try to understand people’s actions. Also I like the endless game Go, I have been practicing Go more than 20 years, but there are still new things, new moves, new variations. I can learn something from both losing or winning games. I can’t help but never stop studying.

What is your biggest go achievement?

My biggest go achievement is winning the Gold medal from 2010 Asian game in Guangzhou. I was a representative from Korea for Female team. In the final match versus China team it was 1:1 score, and when I won the last game, our Korean team got first place. The same year, I won the female Kisei title. In that tournament I beat a legendary player Rui Nai Wei 9p. After winning two events I promoted from 1p to 3p.

Other than that I qualified to a lot of international tournaments and as a representative for Korea. I studied in the Korean national team 2014-2017 February. I am still ranked in the top 10 female players in Korea.

Where do you live?

I was born and grew up in Seoul, Korea. But now I am living in Montreal, Canada since 2017. Ever since I became pro player, I was interested in spreading Go in the world. I used to teach in BIBA (Blackie & Diana’s International Baduk Academy) to learn English and teach Baduk.

I visited many Go clubs and events in Europe, Asia and North American countries. Finally I’ve been staying Montreal for 1 year.

I often teach both in real life go events and online. I also stream on twitch and upload videos on my youtube channel. You can find additional information about me and my teaching on my website.

I really appreciate teaching and sharing my knowledge of Go with many people.