May just ended and, therefore, it is time for a new "end of month" special. It's been a fairly quiet month. To bring some more energy to the community, the OSR team is proud to welcome a new addition to it's roster: the all-mighty BoneSaw. We hope that with his help we'll be able to tackle on more projects in the upcoming months.

We decided to introduce a new tradition: The monthly problem! With the amount of league games that are being played every month, alemitrani has suggested to draw a nice problem from one of the games to make us see if we can find how to turn around a league game.

This month's problem is taken from a game played in the Chilean League featuring luzambar (12k) vs tatesin (5k).

Black just played the marked stone to kill white! Even though the situation looks very grim for white, he needs to live if he wants a shot at winning the game. What would you try to live? 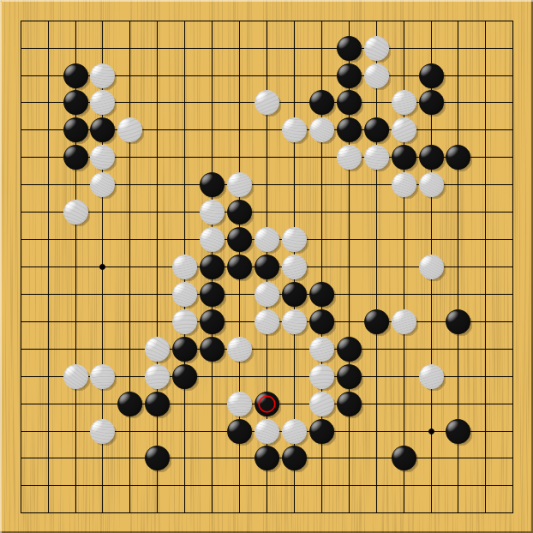 Feel free to join us on discord and post your thoughts in the #tsumego-solutions channel! The answer will be posted in next month's update.

This month has been one hell of a run for first place with BoneSaw's comeback to the league, GoDave's usual activity and Newbator giving them both a run for their money! Ultimately BoneSaw ended up winning the race by a few inches and is this month's OSR league champion.

The DDK league was more active than last month thanks to the amazing participation of newbator. We are proud to welcome him to the land of SDKs and we hope to see more activity in the league in June.

The Dan league was more active than usual with a grand total of 7 games played That's a 350% increase compared to April! We saw new names in HelcioAlex (Brazil's representant at the WAGC) and Linsanity7. Hopefully we'll be able to see them clash again for the June league!

Sadly the 9x9 league has seen no play this month. This is the perfect league for you if you are new to the game or if you just want some fast-paced games. Feel free to hop in and enjoy go in this smaller format so that we can keep the league alive.

Congratulations to the winners, and thanks to everyone for participating!

Jeff Lecture
Jeff will talk about when to protect groups and when to take points.

Ethelor vs Norman Tsai!
Ethelor won a teaching game with Norman Tsai 6d by winning the April OSR Monthly League! The game will take place on KGS in the OSR room